Thoughts on a billboard

On a recent visit to New Plymouth I was rather taken aback to see a billboard outside a central city church posing the question: “Evolution? How come we still have apes?” It wasn’t so much surprise that someone could know so little about evolutionary theory that they would think this was a persuasive argument – versions of this are often to be seen in the less sophisticated creationist publications – it was more that they should feel the urge to display their ignorance on a busy street corner. 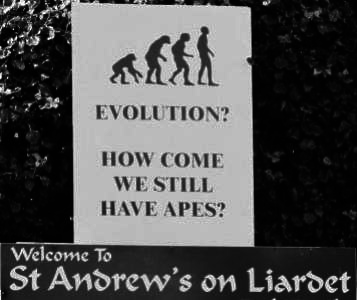 The question is easily answered: it’s a bit like asking someone why there are still Scots if their ancestors came from Scotland. Evolution proceeds through localised change in sub-populations, not wholesale transformations of species across their entire range – and none of the modern ape species are ancestral to us in any case. One could also ask why, if humans were created separately from all other animals, there are animals which are so much like us – in other words if creationism is true, why are there apes at all?

I was reminded of a trivia word game my daughter once played, in which the clue was “Darwin’s theory of evolution”, and the answer was “natural selection”. The person who failed to answer this asserted she couldn’t be expected to know such things, since she didn’t believe in evolution. The same principle seems to apply at the New Plymouth church – decide you don’t believe in something, then refuse to learn anything about it. This has got it backwards, of course; if you’re going to disbelieve something, the least you can do is find out what it is that you don’t believe in.

The same challenge is often thrown at skeptics by believers who are convinced that if only we read the literature on homeopathy, or chiropractic, or UFOs or whatever, we would see the truth of their claims. While it isn’t necessary to have detailed knowledge of every last wacky idea – if it defies basic laws of physics and chemistry it’s almost certainly bunk – the irony is that many skeptics are very well informed about such things, and disbelieve because of what they know rather than what they don’t know. In the end though, it isn’t knowledge or the lack of it that makes the difference between a believer and a sceptic (whether they be sceptical of evolution or homeopathy), it’s the habit of critical thought – or the lack of it.

Waiting for the big one

The murder that never was

Have universities degraded to teaching ‘only’ scientific knowledge?