Pictures don’t lie, right? Of course they do. And they were deceiving us long before Photoshop made the manipulation of images almost child’s play.

Today, nobody would bat an eye at a ghostly image of Abraham Lincoln standing behind his grief-stricken widow, apparently comforting her. But back in the 1860s when William Mumler produced the first ‘spirit photographs’ the public was stunned. These photos appeared to show dead relatives hovering around the living subject who had posed for the picture. Photography was magical enough, so it didn’t seem such a stretch that the camera could see things that the human eye could not

Mumler discovered ‘double exposure’ accidentally when he mistakenly used a previously exposed but undeveloped photographic plate. He immediately recognised the financial potential of this discovery and reinvented himself as a psychic medium who specialised in communicating with the other side through photographs. By today’s standards his efforts were amateurish but in the heyday of spiritualism they were readily accepted as authentic. Only when Mumler made the mistake of using images of people who were still alive as his ‘ghosts’, did his little scam crumble. But by this time many other ‘spirit photographers’ had recognised the lucrative nature of the business and had gotten into the game. And amazingly, the clever ruse even snared luminaries like Sir Arthur Conan Doyle and Sir William Crookes. Conan Doyle, the creator of Sherlock Holmes, was a physician and Crookes was a pioneer in chemistry and physics. One would think they would have known better.

Conan Doyle was a staunch believer in spiritualism, a position his famous detective would have taken a dim view of. But it was Sir Arthur’s championing of another type of fake photograph that best demonstrates the extent of his credulity. In 1917 two young girls produced a photo that purported to show fairies dancing in the woods. Conan Doyle was convinced the pictures were real and refused to believe that he had been fooled by the simple trick of hanging cardboard cutouts by a thread in front of the camera. It was inconceivable to him that a couple of uneducated girls could put one over on someone of his stature. The pictures therefore had to be evidence of the existence of fairies! In 1983 Elsie Wright and Frances Griffiths finally admitted that they had faked the photographs but nevertheless maintained they had actually seen real fairies.

By the time the ladies had unburdened their souls, Roger Patterson and Robert Gimlin had outdone the ‘Cottingley fairies’. In 1967 these two thrilled the world by capturing the first images of the fabled Bigfoot. Their short film shows a creature lumbering across the woods, looking very much like a man in a gorilla suit. There is good reason for that. It is a man dressed in a gorilla suit. The elaborate hoax was described in detail at a recent conference on magic history by Phillip Morris, a man who should know, since it was his costume company that provided and altered the gorilla suit used to stage the scene. Needless to say there are legions of Bigfoot believers who don’t buy Morris’ claim and remain convinced that some sort of giant ape-like creature prowls the Pacific Northwest.

With such ample historical evidence about photographic manipulation, it’s surprising how few people question the authenticity of a series of photographs being circulated on the internet purporting to show the results of a student’s science fair experiment. The pictures depict plants supposedly watered either with microwaved water, or with water that has been heated on a stove top. And guess what! The microwave-watered plants wither while the others flourish! 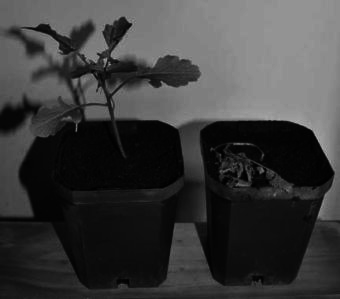 One can come up with all sorts of possible explanations for the difference. Was the soil the same in the two plants? Were they given equal amounts of water? Could they have been exposed to different lighting conditions? Was there some difference in the seeds? But how about a simpler possibility? Fraud. It isn?t very hard to set up two plants side by side and ensure that one thrives while the other dies. Just water one and not the other. Of course the possibility that this is the way the pictures were created does not prove the case.

Heating water in a microwave oven does nothing other than raise its temperature. Any talk about “the structure or energy of the water being compromised” is plain bunk. But absurdly implausible arguments don’t prove that the pictures are fraudulent either. What proves it is the good old standard of science: reproducibility. Or lack of.

I did the experiment. I watered plants with microwaved water, kettle-boiled water, and stove-top boiled water, feeling pretty silly about it, but I did it. The results? As expected, no difference. I didn’t take any pictures because, after all, how would you know that they are not faked? So here is the choice. You can take my word that the experiment cannot be reproduced, accept that science tells us that microwaves do nothing to water other than heat it, or take at face value some pictures in a circulating email that purport to show an effect that has eluded scientists around the world but was discovered by a student pursuing a science fair project. Better yet, do the experiment yourself!

As you might guess, I don’t believe in spirit photographs, fairies, Bigfoot or plants succumbing to the evils of microwaved water. And I would have put goats that climb trees into the same ‘unbelievable’ category. But I would have been wrong. It seems that some Moroccan goats have learned to climb the argan tree in search of its olive-like fruit. Legend has it that the undigested seeds that pass through the goats used to be collected and pressed into “argan oil,” a traditional food flavouring. Highly questionable. The oil, also used in the cosmetic industry, is actually pressed from fruit that has been picked by human hands, making the tree-climbing goats a nuisance. Still, one can appreciate their remarkable athleticism. Easy to find pictures of their exploits on line. And pictures don’t lie? Right? 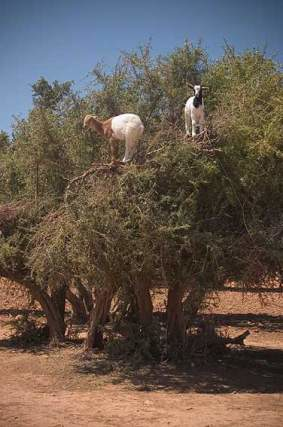