Ghost Squid Boats in the Sky

In December 1978 and January 1979 there was a spate of sightings of lights in the night sky around New Zealand, some of them seen from aircraft. Many of these sightings were claimed to have been UFOs. The most widely-reported sighting was of a very bright light seen by all on board an Argosy aircraft piloted by Captain Bill Startup as it flew Northeast over the sea from Christchurch at about 0220 – 0230 on 31 December 1978. It was watched for over ten minutes and was photographed from the cockpit of the Argosy by David Crockett on a 16mm colour movie film. The aircraft radar was operating in the ground-mapping mode, so could see objects only below the level of the aircraft, and according to Captain Startup it showed a return similar to that of a large ship. The position of the radar object was about the same as that occupied by the very bright light.

This encounter was reported worldwide and for the last twenty years we have been expected to believe that this is the best-documented UFO sighting ever. This note presents evidence not previously available, in support of the “Squid Boat Hypothesis” to explain this encounter, and concludes that rather than being a single boat this UFO was a small group of squid boats, seen from an aircraft on a clear dark night, at a minimum range of the order of six kilometres.

The suggestion that squid boats could have accounted for some of the UFO sightings, including this one, had already been made within a few days of the events, but was not accepted by some of those involved. In particular the people who had been on the flight on 31 December were not satisfied with the report issued by the Ministry of Defence. Quentin Fogarty, the TV journalist who had arranged that he and his film crew could be on the flight, has written, “Like so many of our critics, the New Zealand Ministry of Defence and the other government bodies involved did not have access to the film, nor to all the relevant data.”

The person who did have access to the film and all the relevant data in 1979 was Dr Bruce Maccabee, chairman of the Fund for UFO Research Inc., of Washington D.C. When he heard of this sighting, he came to New Zealand and made an extensive study of this and some of the other events. He sent a copy of a report “What Really Happened in New Zealand” to the New Zealand UFO Studies Centre (NUSC), who said, “The New Zealand UFO Studies Centre is pleased to recommend Dr Maccabee’s investigation of this case as an excellent example of serious and scientific UFO research.”

Our response at DSIR was quite the opposite.

At about the same time as he sent his report to NUSC Dr Maccabee published a paper entitled “Photometric Properties of an Unidentified Object Seen off the Coast of New Zealand” in the scientific journal Applied Optics. Our response at DSIR was a paper commenting that we did not accept Dr Maccabee’s analysis and the implication that a UFO was photographed. We suggested that a very likely source of the light was a squid boat; Dr Maccabee was permitted to publish a response to our comments. We objected to Dr Maccabee’s new and altered claims but the editor refused to continue the dialogue with the comment, “The discussion of this particular incident now seems to be moving outside the realm of technical optics and into areas not relevant to the subject matter of Applied Optics.”

Captain Startup’s 1980 book, The Kaikoura UFOs dismissed the Squid Boat Hypothesis and Quentin Fogarty wrote in his 1982 book “Let’s Hope They’re Friendly!” “To my knowledge, the New Zealand scientists still have not studied the entire UFO footage, nor have they spoken to all the witnesses. Maybe when they finally get around to studying all the information, interviewing all the witnesses and analysing all the movie footage, their findings might be worthy of consideration. Until then, I do not believe they have any right to expect their guesswork to be taken seriously. The reports could of course be part of a deliberate government cover-up.”

There was a cover-up all right, not a government one, and perhaps not deliberate, by Quentin Fogarty and his friends. They made neither the film nor a copy of it available to us to see for ourselves what was on it.

The next account appeared in the 1982 BBCTV Horizon documentary, “The Case of the UFOs” that includes parts of the original movie made by David Crockett. I recently played my video copy of this TV programme and realised that here was the film evidence that had been in my possession since 1983 but overlooked for about 17 years.

The 16mm colour movie was made using both a 16-100mm zoom lens and an 80-240mm zoom lens. The total light intensity and the size of the object were estimated by Dr Maccabee from an analysis of many frames filmed with the 16-100mm zoom lens at an estimated range of about 18km, looking downwards about ten degrees below horizontal. Assuming that this lens was always set to 100mm focal length, when the size of the images and other information suggest that on occasion it was set to less than 50mm, he erroneously claimed that the size would be consistent with a non-circular source about 12m high by 18m wide. He has subsequently claimed that the light intensity was much too high to be from a single squid boat. A more likely size would be at least 24m by 36m, and if the source was extended horizontally along the ocean surface the 24m ‘height’ is a horizontal ‘length’ of at least 60m and possibly as much as 120 metres.

The sequence lasting more than 80 seconds (over 800 frames) using the 80-240mm telephoto lens was made looking downwards perhaps 38 degrees below horizontal, when the aircraft was about 6 km from the light, and at least some of this sequence appears on the BBC reproduction. Many frames with images similar to squid boat lights are in reasonable focus, and allow size estimates to be made. 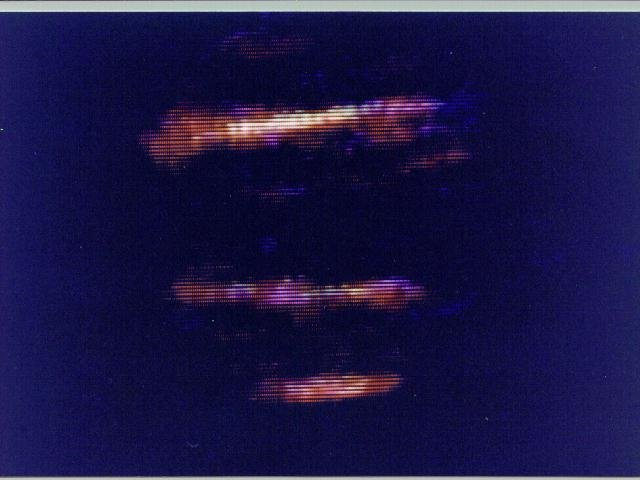 The 80-240mm lens images, such as those in Figures 1 and 2, are much larger than the 16-100mm lens images. The size ranges from about 340mm “diameter”with no resolvable details, filmed when the lens was obviously zoomed to minimum focal length, to “beach balls” about 2.2mm “diameter” when zoomed to maximum. Many of the larger images contain a large number of clearly-resolved white lights, and evidence of more than one row of lights making up the image. Typically three, four, or five rows, each apparently containing up to ten lights, are seen. The rows of lights are roughly parallel and their relative positions and azimuths change with time, suggesting relative motion. In some frames the rows are widely separated, suggesting objects some distance apart, in others there appear to be two rows end to end.

If we make the reasonable assumptions that the lights come from objects on the sea surface at a range of six kilometres and that the the large images were filmed at 240mm focal length, some of the objects are about 22m long, with about ten lamps along their length, each lamp about 2.4m from its neighbours. In several frames the sideways separation between two distinct objects translates to 50m on the water. These dimensions are very similar to those of some small squid boats that are typically about 25m long with two side-by-side rows of 3-4kw incandescent or mercury-arc lamps strung along wires above the deck, 7m above the water, and about 10 lamps in each row, the lamps in each row being 2.4m apart. 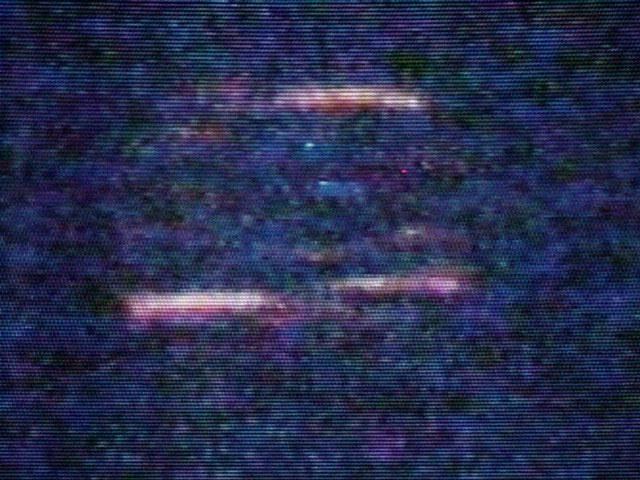 It appears that the claims that this is one of the most significant and best-documented UFO sightings ever made must now be discounted because they are not supported by the books, movie film, radar, and other evidence that subsequently became available. The only rational conclusion when the evidence is scrutinised adequately is that the film includes focused images, not of a UFO, but of a small group of brightly-lit squid boats, seen from an aircraft on a clear dark night, at a range of the order of six kilometres.