In the aftermath of the Challenger disaster and the death of Princess Diana, the world was quickly awash with black humour and very tasteless jokes. But the scale of events in the US on September 11 was such that the reaction has been altogether different. Such humour as there has been has focused on the safer target of Osama bin Laden; the attacks on the World Trade Center, on the other hand, have generated a wave of weirdness, some of it straight-out hoaxes, others apparently attempts to mythologise and make sense of the events.
Nostradamus, always a favourite in times of crisis, was very much to the fore. But, it seems, the great man drew a blank on this one. All the quatrains linked to these attacks and attributed to him are at least partially bogus. Ironically, the most widely distributed (it was mentioned on Holmes, TV3, and in several mainstream newspaper articles) originated in an article written by one Neil Marshall, a student at Brock University in Canada and published on the internet in the 1990s, as a fabricated example to illustrate how easily an important-sounding prophecy can be crafted through the use of abstract imagery. This is how Marshall put it:

“If I make, say, a thousand prophecies that are fairly abstract, for example:

In the City of God there will be a great thunder,
Two brothers torn apart by Chaos,
While the fortress endures, the great leader will succumb

“Well, let us analyse this. For example, what does City of God mean? It could be Mecca, Medina, Rome, Jerusalem, Salt Lake City, or any holy city depending on your religion. What do I mean by thunder – a storm? War? Earthquake? Lots of stuff can be described by thunder. There are a lot of two brothers on this world (I think the number runs among the billions), and “fortress endures”… what? – besiegement, famine, etc? What great leader? How will he succumb? To what?

“Now let the prophecy rest for a few years. Add a couple of thousand more. Eventually, one of them will fit close enough with events that have happened in the future that the prophecy will appear to come true. If you make enough prophecies and are intelligent enough to word them in such a way that they are abstract you become an instant future seer person.”

And now of course, with hindsight, the two brothers are the towers of the World Trade Center, the fortress is the Pentagon, the holy city is New York (why was everyone so happy to accept this one?) and the great leader is George W Bush. The version as distributed recently also has a line tacked on the end, “The third big war will begin when the city is burning”.

Given the internet’s reputation as a spreader of misinformation, it was actually quite hard to find credulous accounts of these mock prophecies on the world wide web. The search engine, HotBot, even went so far as to set up a link labeled “Nostradamus Hoax” at the top of its search results for “Nostradamus” and “World Trade Center”, directing searchers to a site debunking the whole affair. CSICOP have also set up an excellent page, www.csicop.org/hoaxwatch, keeping track of the largely email-spread bogus September 11 material.

One widely distributed photo (two copies were emailed to our address), supposedly from a camera recovered from the WTC wreckage, purports to capture one of the incoming jets in the background of a typical tourist snap: the CSICOP site now has the original airliner image which was digitally inserted into this picture. Other images include satanic faces leering from the smoke of the building – given the human propensity for seeing faces everywhere (eg the Face on Mars) these are easily explained.

And the numerologists have been busy, coming up with a whole bunch of supposedly uncanny occurrences of the number 11 (eg New York City, The Pentagon, and Afghanistan all have 11 letters, the attack occurred on 11/9 — 1+1+9=11, the WTC looks like a giant number 11). Never mind that World Trade Center and Osama bin Laden, to pick two obvious contenders, don’t have 11 letters, the trick with numerology is to run with the hits and ignore the misses.

Another remarkable image (see below) comes from CD cover artwork for the album Party Music by left wing hip-hop band The Coup. It was produced in July, but hastily withdrawn on September 11 before the album hit the market. While it seems spookily prescient at first, it’s worth remembering that the WTC had already been the target of a bombing attempt in 1993, and with the recent huge protests against globalisation, the destruction of the building which most symbolises word trade must have seemed, before it actually happened, an image which would strike a positive chord in some circles. In detail, the correlation between art and reality is not that strong: both explosions occur simultaneously in the artwork, and are the result of high explosives, not aircraft, but we have a tendency to see the parallels and gloss over the discrepancies. It is, of course, this very human characteristic which makes the prophecies of Nostradamus and others so compelling to so many. 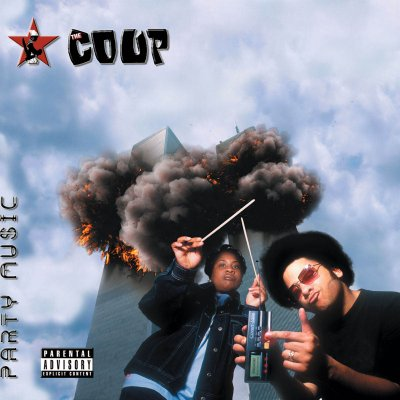