Dream triggers: of shapely rocks and shapes in rocks

It behoves all scientists to be both skeptical and open-minded, research scientist Hamish Campbell told delegates attending last year’s Skeptic Conference in Rotorua. In his capacity as a professional palaeontologist since 1978 Dr Campbell has seen many geological and palaeontological theories revisited and revised. He has also dealt with members of the public convinced they have made major discoveries. ‘Dinosaur eggs’ and ‘meteorites’ were routinely found by members of the public, who were often convinced their finds would transform them from rags to riches. “There is nothing worse than being deflated by an ordinary authority in the guise of a museum geologist!” he said. The title of the talk alluded to such people and the diplomatic skepticism required to address their queries and concerns.

Much of Dr Campbell’s own research has been on the antiquity of New Zealand’s land surface.

Joan Wiffen’s discovery of 75 million year old dinosaurs was highly significant, he said. It followed that if there were dinosaurs in New Zealand, there must have been mammals, since the two co-evolved and co-existed. “What happened to them? We think we know what happened to the dinosaurs, but why did the mammals disappear?” 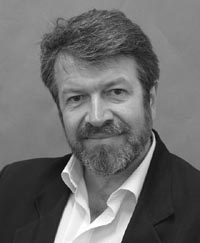 He suggested one possible solution. “Some researchers, including myself, have dared suggest that there may not have been any land at all during Late Oligocene to early Miocene time about 25-23 million years ago: the entire landmass may have been submerged or certainly greatly reduced with only ephemeral small islands and no continuous land areas.”

“These maps were first attempted in 1959 and were published initially in 1962, again in 1975 and many times after. They have been greatly used and have become a kind of mantra. Nowadays, however, hard questions are being asked about the geological evidence for Sir Charles’ linework. What is the basis for his paleo-coast line? How certain is it?”

To illustrate his point Dr Campbell showed images of marine-cut surfaces near Oamaru and the Kakanui Mountains and also the Hawkdun Range in Otago.

“This scenario of total submergence has huge implications for the history of terrestrial life in New Zealand, but at one stroke may explain the absence of mammals: they were all drowned! Easy to say, but hard to prove.”

He also described his three-year Marsden Fund project which explores the antiquity of the land surface in the Chatham Islands. “There is compelling geological evidence to suggest that it is all less than four million years old.”

On rare occasions, reexamination of earlier work had revealed cases of out and out fraud. One professional geologist who had ‘gone off the rails’ was Professor Vishwa Jit Gupta, from the University of Punjab, Chandigarh. He falsified the geological record and scientific literature for more than 30 years before being found out in 1987.

Among his anecdotes, Dr Campbell delved into the history of palaeontology and geology, commenting on Nicolaus Steno who in the late 1660s became involved in a great debate about the origin of fossils. “This story is the subject of a fascinating, recently published book called The Seashell on the Mountain Top, in which it is claimed that among many amazing achievements, Steno was the first person to establish (in 1667) that humans have eggs!”

At any rate, Steno’s career was more successful than that of one Professor Solas, who was imprisoned in the 19th century for daring to suggest that chalk was made up of tiny fossils.

Skeptics were told that the first professor of geology, William Buckland, was established at Oxford University in 1818 expressly to research evidence of the great flood. And that 150 years ago, Sir Charles Lyell used his amazing powers of logic to determine a direct causal link between the 1855 Wairarapa Earthquake and movement on the Wairarapa Fault.

“This was the first scientific realisation that earthquakes relate to geological faults.”

He also talked about the great fascination in markings on rocks (petroglyphs) such as in the Chathams (Nunuku’s Cave) and the Kaimanawa Wall near Taupo.