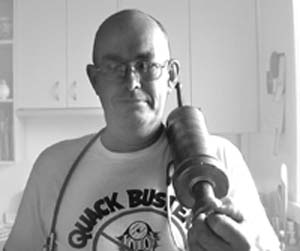 PHARMAC is the Government drug-purchasing agency. Pharmac’s 2005 Annual Review showed that about eight prescription items were issued per adult in that year. In the course of my work I write a lot of prescriptions but I certainly don’t consume eight scripts per year.

I did a few locums recently and I was frequently dismayed to read patient records, particularly children’s records, to find repeated prescriptions for all sorts of antibiotics. The majority of childhood infections are viral but many doctors seem to have a compulsion to write prescriptions for antibiotics, which are nothing more than expensive placebos.

The Pharmac list showed almost 1.5 million prescriptions for the antibiotics amoxycillin and the compound antibiotic augmentin. This is completely ludicrous and it beggars belief that there can be so many bacterial infections in one year.

Omeprazole, an indigestion remedy, was prescribed on 800,000 occasions, probably to alleviate the indigestion caused by all the other medicines that people are swallowing. Here is a one-day cold cure from 1925:

“A chest or head cold can be cured in one night if treated in time. Put on a flannel night dress, and also wrap a blanket well over that, then sit for 15 minutes with the feet and ankles in a mustard and water foot-bath as hot as it can be borne, adding more hot water if necessary. Meanwhile sip a pint of hot, strong home-made Lemonade (or a glass of hot Whisky). Next dry the feet quickly, and get into bed instantly. Keep the blanket still wrapped around you, as the touch of cold sheets would undo all the work. The cold will be gone in the morning.”

Readers may laugh at this quaint and harmless placebo treatment from 1925. Now we are more sophisticated and require expensive placebos such as antibiotics!

I hope a reader will try this ‘cure’ and report back. I particularly approve of the whisky option.

The Blenheim Sun (16 November) recently published an advertorial for homeopathy. The Bay of Plenty College of Homeopathy is offering extramural courses in Auckland, Tauranga, and Christchurch. The National Diploma and the Diploma of Homeopathy (Animal Health) are NZQA approved. By endorsing these ‘dilutions of grandeur’ the NZQA is in serious danger of discrediting itself. What next, Diploma of Iridology, Diploma of Alien Abduction?

The Ministry of Education has approved student loans for this nonsense!

The article goes on to claim with respect to the 1831 Cholera epidemic “mortality rates using homeopathy were an astonishingly low 21% compared with 59% for those treated conventionally.” This is a deliberate distortion of history. Standard medical treatments in 1831 involved bleeding and purging and it is not surprising that ‘conventional’ treatment was worse than doing nothing, which is what homeopathy is all about. If the 1831 Doctors had offered their patients water (ie placebo), there would have been no difference between the respective mortality rates.

I recommend having a look at www.homeopathycollege.com and as many people as possible should write to the NZQA and the Ministry protesting Government support for this nonsense.

Lifestyles of the Rich and Stupid

Katie Holmes, recently pregnant to Tom Cruise, will be expected to have a silent birth in accordance with the Scientology beliefs of her partner. I often describe scientology as the ‘Sect of the mystical galvanometer’ as they use some such device described as an ‘e-meter’. Pretty much what you would expect from the founder, L Ron Hubbard, a hack science fiction writer.

Scientologists believe that a painful or traumatic birth can trigger ‘irrational fears’ and ‘unwanted emotions’. The article goes on to say, “Groans are a form of expression Scientologists view as less harmful than actual speech” and even “throw me in the car! I want an epidural!” can be regarded as acceptable.

I am looking forward to hearing that Tom Cruise will soon be having a ‘silent vasectomy’. It will be a great relief for the gene pool. As the great joke goes, Tom Cruise got into the gene pool when the lifeguard wasn’t looking.

In issue 76 I reported a trial, which showed that the effects of acupuncture or sham acupuncture are about the same as placebo in the treatment of menopausal hot flushes.

Another popular remedy is the herb, black cohosh, and a recent study found no difference in either the intensity or frequency of hot flushes between placebo and the herbal treatment. The next time any readers see this product for sale in a pharmacy please feel free to draw this report to the pharmacist’s attention.

Dr LeFever is a clinical psychologist concerned about the high rates of use of stimulant medication in some US schools. She found that 8-10% of children in two districts were taking some form of stimulant for ADHD. Dr LeFever is reported as being “outspoken about what she has called the over-diagnosis and overmedication of children said to have ADHD.”

Following anonymous charges of scientific misconduct, the establishment reacted by trying to sack her, an attempt that triggered a strong campaign to have her reinstated. A petition in her favour criticised her employer’s actions as “an egregious violation of academic freedom.”

I suspect that this sort of thing will become more common. Groups of people who have a shared delusion (homeopathy, acupuncture, ADHD — take your pick) react angrily when their sacred beliefs are questioned.