Natural products chemistry – the road from nature to pharmaceutical

Many pharmaceuticals originate from nature, but their development is very different from that of so-called natural health products. This article was originally presented at the 2005 Skeptics Conference.

The field of natural products chemistry deals with the scientific study of chemicals isolated from living organisms. This can be anything from isolating indigo dye from woad, distilling lavender oil from the lavender plant, working with plant oils and animal fats to make soap, to trying to find the active ingredient in a plant extract that reduces fever. 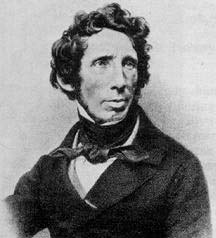 Interest in compounds from living organisms dates back to the beginnings of civilisation. More recently it also gave birth to what we now call ‘organic chemistry’. Initially, organic chemistry was natural products chemistry, when people thought that carbon containing molecules were imbued with a ‘vital force’ and could only be made by living organisms — hence the name ‘organic’. Friedrich Wöhler shattered that idea in 1828 when he became the first to make urea (an organic molecule) from inorganic precursors. Now we define organic chemistry simply as the chemistry of carbon containing compounds.

Unfortunately this mystical feeling that “natural” things are somehow better, or special, has survived till today, and many people are still convinced that “it’s natural, so it’s got to be good!” When dealing with natural substances that have biological activity, one must ask why they have any physiological effect. The answer is chemical defense: plants that do not have thorns, for example, have evolved chemical substances to poison animals that would otherwise eat them. The ‘natural’ effect of any herbal product then, is to make the user sick! We should not be talking about ‘natural is good’, but about chemical warfare.

The mould Penicillium notatum produces and secretes an antibiotic, a compound that inhibits bacteria that could compete with it for food or resources. This is chemical warfare on the microscale, a life and death battle for survival between the mould and its enemy. The mould certainly does not make the antibiotic for the benefit of mankind — any beneficial effect to us is an accidental advantage. But we can certainly make good use of that! The antibiotic in question is of course penicillin, the first discovered antibiotic. It has revolutionised medical treatment of bacterial infections and earned its discoverers Sir Alexander Fleming, Ernst Chain and Sir Howard Florey the 1945 Nobel Prize in Medicine. 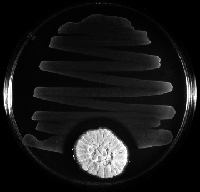 We certainly exploit this type of biological activity to our great advantage. Natural products, or compounds derived from natural products, comprise the majority of pharmaceuticals in use today. So what is the difference between them and ‘herbal remedies’ that are sold in health shops and supermarkets?

Before a natural product can be approved for use as a human pharmaceutical, it must go through a rigorous process of testing during clinical trials. And before it even enters those, it must be fully identified and characterised. This precise analysis is what makes the known and well understood pharmaceuticals stand apart from herbal remedies. For the most part, we know very little, if anything, about their chemical composition and effects.

Once the initial discovery process is complete, the natural product is subjected to a barrage of tests in vitro (in the test tube) and in vivo (in lab animals). Once biological activity and initial safety is demonstrated, the potential pharmaceutical can be admitted to the Phase I clinical trial. This involves a small group of healthy volunteers who are given the compound to determine its safety (that is, evaluate any toxicity and side effects) and tolerated dosage. Phase II trial follows, where the effectiveness of the compound at curing a disease is finally tested on a small number of human patients.

Finally, Phase III is a large scale trial on 1000 to 3000 patients, verifying effectiveness and monitoring any adverse effects from long term use. At the end, all the data are submitted to the monitoring agency (in the US this is the Food and Drug Administration) for evaluation. Once approval is given, the drug can be launched onto the market, where it still undergoes long-term safety monitoring and additional tests during the so-called Phase IV trial.

On average, out of 5000 compounds that undergo pre-clinical testing, only five are deemed promising enough to enter clinical trials. Out of those five, only one is approved — others fail because they do not show effectiveness once trialled in humans, or exhibit unacceptable levels of toxicity or side effects. From discovery to prescription, the whole process takes on average 12 years, with costs estimated to be in the hundreds of millions of US dollars.

While the process may not be perfect, it does attempt to ensure that the medication we are prescribed is first of all safe, and that it works. Herbal remedies cannot claim the same.

The Story of Taxol

In the 1960s the National Cancer Institute (NCI) launched a screening programme to test various plants for potential anti-cancer activity. Over the next two decades they screened more than 114,000 plant extracts. This included, in 1962, a collection of bark from the Pacific Yew, Taxus brevifolia. Immediately, this shrub generated great excitement as it showed interesting activity in biological assays. A research project was launched to investigate these properties, and in 1967 the active ingredient was isolated and named paclitaxel. The structure was not solved until four years later in 1971, a reflection of its high degree of complexity. Paclitaxel exhibited a broad spectrum of activity against cancer cells in vitro, and in 1979 scientists discovered its mode of action in the cell — a completely novel way of stopping and killing cancerous cells. In vivo testing showed phenomenal successes — paclitaxel stopped the growth and even shriveled breast cancer tumours in mice. All of these results made paclitaxel the hottest natural product around. Everyone wanted to get their hands on some, but paclitaxel had many hurdles yet to overcome.

Researchers rushed the compound into clinical trials, but immediately faced a problem. Paclitaxel was not soluble in anything. As one researcher put it, “it had the solubility of a brick.” How were they going to administer it to patients? Finally a concoction consisting mainly of castor oil was found to be effective, but was almost the drug’s undoing. Paclitaxel proceeded to clinical trials, and was almost rejected right then and there, as it showed unacceptable levels of side-effects. Fortunately, someone figured out that most of these were due to the castor oil, and after the formulation was changed somewhat, the drug continued to Phase II clinical trials.

The results were astonishing: against the most virulent forms of ovarian cancer, paclitaxel showed unheard of levels of response. Doctors and researchers were suddenly clamouring for more and more of the drug. But Taxol faced its greatest challenge yet: that of supply.

The compound paclitaxel is present in only minute amounts in the bark of Taxus brevifolia. Fifteen kilograms of the bark yield barely half a gram of the active compound, which means it would take six 100-year-old trees to treat one patient. Quite aside from the ecological impact of the large scale logging operation required, there simply are not enough Pacific Yew trees in the world to treat all the cancer patients.

Making the compound in the lab was not an option. Though a successful synthesis of paclitaxel was reported in the literature, the molecule was too complex for this to be a viable route to obtaining large quantities. Fortunately however, researchers discovered that the much more common English Yew (Taxus baccata) contained relatively large quantities of a compound that is related to paclitaxel. Eventually in 1989 they succeeded in transforming this 10-deacetylbaccatin into paclitaxel. This semi-synthetic pathway is how Taxol is made even today. 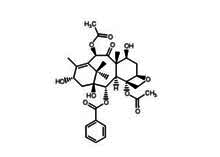 Having successfully completed clinical trials, paclitaxel was launched onto the market in 1993 under the trade name Taxol as a drug to treat ovarian cancer. Sales of Taxol grew exponentially, rapidly reaching and passing the US$1 billion mark. Today, Taxol remains the leading treatment against ovarian, breast and lung cancers, and Karposi’s sarcoma. Yet it had not been an easy journey: from bark to drug it took 31 years, and with an estimated cost in excess of US $300 million.

Most of the natural products that have “made it” as pharmaceuticals come from the terrestrial environment, not surprisingly, as terrestrial plants, animals and fungi are most easily accessible to researchers. In the last few decades however, with the advent of scuba diving, a whole new world has opened up: the marine environment. The Marine Chemistry Lab at Victoria University studies chemical compounds found in marine plants and animals. We examine a wide variety of organisms, including sponges, seaweeds, sea-slugs and others. Our ultimate goal is to discover new, biologically active chemicals from marine organisms and develop them into pharmaceuticals.

In 1998, Lyndon West (who was at that time doing his PhD in our lab), discovered a new compound from the sponge Mycale hetsheli. He named it peloruside, after Pelorus Sound where the sponge came from. The compound looked very interesting right from the start, so patents were filed right away, and biological testing initiated. Indeed, exhaustive in vitro tests revealed that peloruside had the same mode of action as Taxol! This news generated a lot of interest, and in 2004 a deal was signed with Reata, a US Pharmaceutical company. Their tests in mice showed very promising results: injections of peloruside into grafted tumours radically reduced their growth. With exciting results like that, everyone is now keen to start clinical trials. 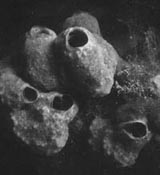 Unfortunately, we face a supply problem even worse than the Taxol people did: the compound is once again present in only small amounts in the sponge. In addition, sponge populations are scarce in the wild, and difficult to reach. They also show a large variability in the amounts of peloruside they produce, depending on depth, season, geographical location and even individual animal.

But, we have a solution: aquaculture! Fortunately for the project, the sponge can be propagated from small cuttings. We have taken bits of wild sponges and tied them to ropes that have been suspended off the anchor lines of a mussel farm in the Marlborough Sounds. The sponge has grown well — our sponge farm yielded almost 100 kilograms of the sponge in 2005. Some of this mass was returned to the ropes to grow again for this year, the rest has been harvested and is now being processed in our lab. We hope to get gram amounts of peloruside and hopefully start clinical trials with Reata Pharmaceuticals in the US this year.

Could peloruside be the next wonder drug against cancer? Well, it has a long way to go yet. But it certainly shows promise, so watch this space. 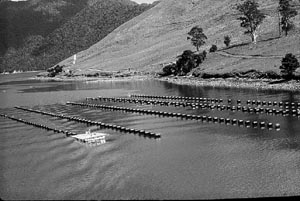