The last of Hamilton’s highly successful Café Scientifique series for 2005 examined the issue of dating the Earth and the universe. The date was chosen to be as close as possible to Bishop Ussher’s preferred date of October 22 when, he calculated, the creation of the universe began in the year 4004 BC.

This was an event the NZ Skeptics definitely thought we should support, so we donated a birthday cake, magnificently iced and in the shape of a dinosaur, which was much enjoyed by the 50 or so people attending the central city café. 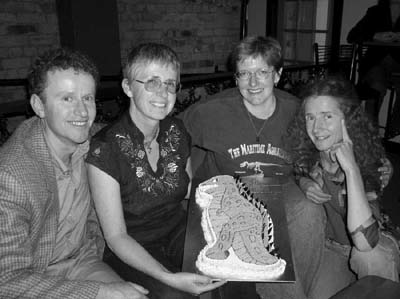 Ussher was, of course, only the starting point for a wide ranging examination, led by Waikato University’s Penny Cooke, of different ideas and techniques for answering a question which has only been resolved with any real precision within the last few decades. An irony is that the systematic, numerical approach of Ussher and men like him (his date was at least better than Isaac Newton’s first attempt) would, when more information came to light, undermine the authority of the texts the bishop was trying to uphold.

Among those present on the night was journalist Philippa Stevenson, who provided a very entertaining summary in the NZ Herald. The Café Scientifique concept has proved to be a very successful medium for engaging the general public with scientific issues, and we look forward to another lively programme in 2006.