An article in the Listener makes much ado about very little.

The week after the Listener won Best News-stand Magazine of the Year its cover featured three mug shots of ordinary-looking people and the headline:

What if someone you love just vanished?

Six thousand people vanish a year? That’s more than 16 a day! Many if not most of us would infer from these words that the people had been missing for a long time and would probably never be found. 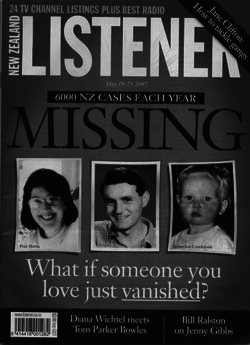 I thought, this can’t be true, and my suspicion was soon confirmed as I read the article. The problem was that the writers, Denis Welch and Olivia Kember, had failed to come to grips with a range of differing statistics on ‘missing’, ‘disappeared’ and ‘vanished’ people, and the ambiguities inherent in those terms. Actually the article quoted a figure of 12,000, taken from the police website, but omitted the website’s crucial next sentence: “… within 48 hours most missing persons will either be found safe and well or will have returned home.” Later I was to discover that the figure of 6000 came from a Missing Persons Unit police officer.

This struck a familiar chord. Twice in the past when members of my extended family have been on a motoring tour there has been some misunderstanding over their itinerary, resulting in anxious calls to the police and presumably adding more “missing persons” to the statistics. But no one was really missing: there was just doubt as to whether they were safe, and for a short time they could theoretically have vanished.

So I wrote a letter to the editor, making most of the above points and saying that the statistics were “disgracefully muddled … a mish-mash of confused figures.”

Welch himself replied, saying, “I think you’ve been a bit harsh on us. I agonised a lot over what figure of missing people was correct and consequently feel that you have been rather selective in your own quoting of the article, as I did say ‘All figures should be treated with caution’.”

Yes, he had said that, and no, I hadn’t quoted it. But I thought it was ironic that readers were expected to treat these figures with caution when the journalists had been so careless with them. For one thing, the caveat wouldn’t be read by anyone who just saw the cover at the newsstand. If Welch “agonised” over the missing-persons statistics, why didn’t he make more effort to clarify them?

Welch continued: “I was also careful to refer to ‘cases’ of missing people (I insisted our coverline should use that word) and not to imply that at any given time thousands were missing.” But I couldn’t see how the word “cases” clarified anything-and still I can’t.

There were other things in the article that bothered me too, for example the statement that psychics hadn’t located any missing persons “so far”, and tabloid-style innuendo in the comment on one genuine vanished-person case that “some of the original police files and photographs have gone missing.” There was further innuendo about missing children (“child abduction continues to be rife in the US”) and a man “allegedly a member of a paedophile ring” had been accused of murdering some children “but proof has still to be produced”. Of course, each of these tidbits on its own is minor, but there were more like them and overall I thought this was a sitter for the Bent Spoon.

I wrote back to Welch and said this. He responded by inviting me to write “a new, more balanced letter”, so I did (without quibbling over what was “less balanced” about the first). And he said that he was happy to print it-except for the following:

“Now, of course, the damage is done, and the ‘6000 a year’ figure on your cover will probably become committed to folklore, like ‘one girl in 4 will be molested before the age of 18’, for which we have the promoters of the 1988 Telethon to thank.”

This bit, he said, was “pure sensationalising”.

Nonplussed, I replied that it was the most important point of the whole letter: that the Listener was fomenting an urban myth. It felt as though I was being censored, so I chose not to have my letter published at all, and turned my energies to writing this instead.

And I’ve thought long and hard about where the line lies between abridgement and censorship. I just don’t know. Certainly editors shouldn’t have to publish any old half-baked and ill-informed diatribe (though I think that describes some Listener letters pretty well). But Welch arguably had a personal interest in abridging a letter that criticised not only the magazine, but his own work as well. This perhaps amounted to censorship, and would be all the more deserving of a Bent Spoon.