Psychics are encouraged to keep the caller on the phone for at least 15 minutes, generating $40-$60 per call. In America, one service had approximately six million callers spending an average of $60 (NZ$90). Likewise, New Zealand psychic hotlines can charge from $2.99 (excluding GST) to $4.99 per minute. 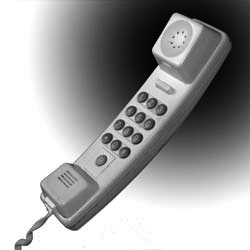 In this context, psychic hotlines aim to make as much money as possible and exploit human vulnerabilities as quoted on a website:

“In turn, the other end is a person who has been set up with a phone by the psychic company. The scammer will keep the unsuspecting victim on the phone for as long as possible as they are being charged minute by minute and the charges are astronomical. Most of the scammers are just good actors and incredibly skilled at keeping people intrigued.”

Frederick Woodruff, an American telephone psychic, wrote candidly about his experience working on a psychic hotline in his book, Secrets of a Telephone Psychic. He confesses:

“So, imagine sitting by a phone that has been converted into another worldly pipeline-waiting for it to ring. And if rent is due, I am hoping it will ring, and ring a lot.”

One woman, Sarah Lassez, describes her experiences addicted to psychic hotlines in her book, Psychic Junkie. She writes:

“It goes without saying that I couldn’t afford these readings. The issue of my massive debt and barely-there unemployment cheques versus my tendency to spend a lot on psychics was one I knew I had to address, but the problem was that stopping just didn’t seem to be an option. No. I had to think of something else, and was thus quite pleased with myself when I discovered the free three minutes that Psychicdom and a couple other sites offered.”

As a psychologist, I was fascinated to explore why individuals would ring psychic hotlines. I was particularly interested in individuals who were ‘addicted’ to ringing the hotlines. In total, I interviewed 17 women and one male (this study is ongoing). All but one sought guidance for relationship issues. Most were recruited on an online support group for ‘psychic junkies’. The ages ranged from early 20s to 60 years of age. Most of the women were single. Most participants in the sample were raised as Catholics and they either became ‘spiritual’ or changed their religion over time. Most of the women dabbled in other psychic phenomena such as tarot card reading, astrology, runes, numerology, and angel cards. Two of the women considered themselves psychic and one of these psychics worked on a psychic hotline for a short time.

Two of the women were befriended by their hotline psychics. One woman psychic lured a woman to join a psychic development group. The woman was not happy when the development group (after one session) did not provide her with information about her lost cat. The other woman became ‘friends’ with another phone psychic. The woman would visit the phone psychic at her home. The woman disclosed that the psychic told her that she worked as a phone psychic since she lost her teeth and she didn’t want any face to face contact, but she had to provide some income to feed her five children. In exchange for psychic readings, the woman would bring the psychic coffee and lunches. This friendship ended abruptly when the psychic left her five children to be with her lover in Australia (I thought the psychic was worried about her missing teeth?).

What does this small sample of self-selected people say about psychic hotlines? The findings, although limited, suggest that individuals do not ring psychic hotlines for entertainment purposes! All of these participants rang psychic hotlines to provide temporary relief, thus giving them some hope in the short term. One of the callers said that when she rings she feels like a closet alcoholic and she enjoyed being ‘naughty’. She disclosed that her friends would be shocked if they knew. Most reported getting a ‘buzz’ from the readings.

Another interesting finding was the amount of money individuals spent on psychic hotlines. The amount varied, but the average per year in this sample was more than $7000. For example, one person said that she had spent $10-15,000 in two years; another has spent $60,000 since 1993, with a binge cycle to her spending; a third has spent $30,000 in eight years. Others confessed to being binge callers ringing several times a day and then stopping for a few days. The figures are summarised in Table 1. Not all participants answered all questions. Data keeps coming in; a recent participant spent US$3000 in one month, with $1500 on a single session. The record so far goes to a British participant, who spent 40,000 in 10 months.

The View from the Other Side

I also interviewed two women, Stacy and Lydia2, who had worked on psychic hotlines for a short time. These are their stories.

Stacy, a mother of two, worked on a few hotlines for short periods to get her through university. She uses tarot cards during the phone readings. Stacy reports that 90 percent of the queries on her weekend shift were concerning relationships, another 10 percent included queries such as finding a lost item (such as a ring), money and job issues, or queries regarding their children. Sunday morning was the busiest time with the majority of questions involving the breakdown of relationships on the Friday or Saturday night. Her clientele were mainly women, with gay men the next largest group. Interestingly, elderly people would ring up late at night following TV advertisements of psychic hotlines. The elderly would not request a reading, rather they were lonely and they wanted to chat.

Lydia defines herself as a practising psychic as well as a medium. Lydia worked on two psychic hotlines approximately six or seven years ago. She did not stay long at the hotlines. Lydia states, “The people were mainly quite desperate in wanting changes and wanting me to make it for them. I hated it when the calls were looking for the lucky numbers for Lotto, so I put them right about the ‘odds’ and they didn’t want to hear that! And I refused to bluff them, against my integrity to do that.”

Lydia further states, “I found it all much too depressing as I am not responsible for others’ lives. However, I did get some rewards when I got a strong link with spirit to bring them a message from someone who had passed over from this life.”

Lydia reports that the majority of callers were female asking about relationships (Will he come back to me? Is my husband having an affair? Will I ever find the right man?) Men would most likely ask about gambling results (eg Lotto numbers, horse racing). 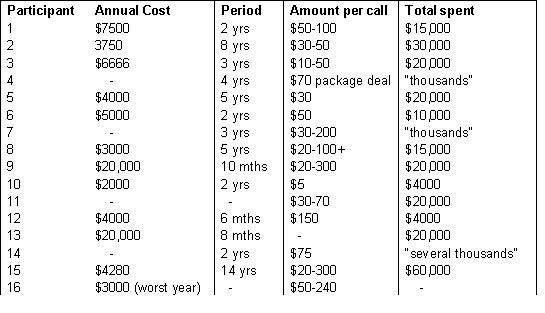 Overall, one of the hotline psychics depicts the callers as lonely or desperate for some reassurance regarding relationships. The other psychic made similar comments, but added that she didn’t want to be responsible for other people’s lives. However, she would rather practise mediumship and provide messages from beyond the grave. Both psychics reported that callers do not ring ‘for entertainment purposes’ as advertised in the psychic hotline ads. Rather they are looking for relief from uncertainty in their lives.

Interestingly, the Psychic Readers Network “briefly established” the Professional Advisors Network in 1993 to replace psychics with psychiatrists and psychotherapists but no one rang. Unlike the psychics, I will let you come to your own conclusions.