TV3 – the best of news, the worst of news

In the first double-header of its kind, one organisation has won both brickbats and plaudits from the NZ Skeptics Society in its 2007 Bent Spoon and Bravo Awards for gullibility and critical thinking respectively-TV3 News and Current Affairs.

TV3´s Campbell Live programme took the Bent Spoon award for Carol Hirschfeld´s August 31 interview with self-proclaimed energy healer and clairvoyant Simone Simmons, who claims to be visited regularly by the spirit of Diana, 10 years after the death of the Princess of Wales.

Promotional material provided by Simmons´s publicist cites her appearance on television in New Zealand and elsewhere as endorsing her claim to be a “global psychic and personality”. Less complimentary was one reaction to Simmons´s Diana ‘tell all’ book, when Guardian columnist Mark Lawson called it “rubbish even in a genre that has redefined the meaning of garbage”.

Her appearance on the Campbell Live programme did nothing to cement TV3´s claim to offer `leading news journalism´. It´s a shame really because we know Campbell Live can do quality current affairs, but they certainly didn´t live up to any standards of excellence in reporting, story telling or research with this one. 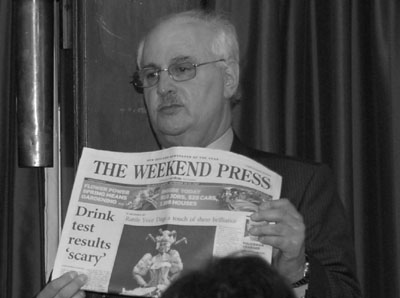 It is important to strongly challenge psychics regarding their claims, because it´s an industry like any other and should be called to account. Otherwise you end up with people believing they are getting value-for-money when they ring psychic hotlines, like the Victoria University Students Association Women´s Rights Officer who spent thousands of dollars of student union money ringing psychic 0900 numbers earlier this year.

Research on how women, in particular, are preyed upon economically and psychologically by the psychic industry was covered at the recent Skeptics Conference, in Christchurch, and a news item covering local research into this has won TV3 reporter Tristram Clayton a Bravo commendation.

Clayton´s Psych Addictive item (July 17) gained praise for providing a seldom-seen critical look at the million-dollar 0900 psychic phoneline business. A recent study by Auckland University psychologist Dr Robin Shepherd revealed women who became psychologically dependent on the psychic hotlines were spending more than $7000 annually each, and not for entertainment purposes either. Shepherd gains a Bravo Award for her study, which is seen as providing hard-to-get data on the exploitation involved in the psychic phoneline industry.

Clayton also won plaudits for items on the establishment of a UFO database and reporting on the Therapeutic Products and Medicines Bill.

We´ll be watching his future career with interest. Perhaps he can teach the old hands at Campbell Live a thing or two about story selection and follow-up. If TV3 feels it must fill its news programming with such soft items, the least they can do is bring some journalistic integrity to it.

The controversy over the Therapeutic Products and Medicines Bill provided multiple nominations for the Skeptics to consider. The attempt to provide standards and accountability in this lucrative trade saw Minister Annette King and industry group Natural Products New Zealand gain Bravo Awards.

We don´t often give awards to politicians, and we don´t often see vested interests providing leadership of this nature, so it´s good to recognise good work when it does happen even if, in this case, it was ultimately unsuccessful.

It is important for complementary and alternative medicines in New Zealand to be appropriately regulated to provide broad consumer protection, whether quality control in product manufacture, truth in advertising, or evidence-based comparisons of the effectiveness of outcomes against other treatments.

The Bent Spoon is named after the infamous symbol of self-proclaimed psychic Uri Geller, and was formally confirmed telepathically by the assembled Skeptics at their annual conference, along with Bravo Awards recognising critical thinking in the media.

Fundamentalism from the inside