The Skeptics have lost one of their founding members, with the death of Bernard Howard in Christchurch, aged 88. Active to the end, he collapsed suddenly while walking to the bus stop. As a regular attendant at Skeptics conferences, Darwin Day dinners and other events, and a frequent contributor to the NZ Skeptic, he will be sorely missed. As Denis Dutton said in the Christchurch Press, “Bernard had a probing mind and knew how to ask the right questions, especially the embarrassing ones. I have never encountered a man with such a rapier-sharp, yet gently delivered, wit. He is irreplaceable.”

According to his own account, Bernard was late joining the Christchurch meeting which founded the NZ Skeptics. The first words spoken to him were: “We have decided to form a committee, but don’t have a treasurer yet. Are you interested?” Bernard, who readily admitted to not being able to refuse anything Denis Dutton asked him to do, was immediately appointed. The society’s first postal address was Bernard’s personal box number at Lincoln College. When Bernard first applied for a box in 1964, he was told the only available box was Number 13. “I wonder why?” asked Bernard.

Born in Manchester in 1920, he met his wife-to-be, Molly Rackett, while they were pupils at adjoining single-sex high schools. Their courting included frequent hikes in the Pennine hills. They married in 1942. By then Bernard had graduated BSc from Manchester University. While there, he had mixed with free-thinkers, rationalists and socialists. These influences stayed with him, though he preferred to think of himself as a humanist, his son Brian says.

Bernard’s parents and sister were religious, but he “quietly made up his own mind that there was no after-life and no God”. There was “no dramatic rebellion” against his family’s beliefs and practices. During World War 2 he was manpowered to research work with the Ministry of Food in London. He later completed studies for his doctorate in biochemistry at London University. He was on the staff of London’s School of Hygiene and Tropical Medicine from 1947 to 1954, and then moved his family to Aberdeen, where he was a senior fellow at the Rowett Research Institute. His work focused on digestion in ruminant animals. [Ed: Kris Howard notes … “My father told me that both his father and his father’s father were also freethinkers-there was some pride in this family history. His sister told me that she too had had similar views, but had converted as an adult and joined an Anglican congregation (St. Anne’s in central Manchester).”]

The institute granted him leave in 1961 for a year-long secondment to the chemistry division of New Zealand’s Department of Scientific and Industrial Research, at Palmerston North. He brought his family to New Zealand and returned with them to Scotland in 1962. While in New Zealand, he heard of an opening at Lincoln as professor to establish a department of Biochemistry. He applied for and gained the position. So the Howards moved back to New Zealand in 1964, although the eldest son remained in Scotland and the second son completed his schooling there before joining them. They lived in a staff house at Lincoln until shifting into their own home, at Cashmere, in 1968. The Lincoln history says Bernard’s work on micro-organisms was “internationally known”. Brian remembers his parents’ home as one of books, classical music and news broadcasts, which his father followed closely. His parents attended ballets, operas and plays. They tramped in the high country. They hosted visiting academics, including Richard Dawkins, and fellow scientists and skeptics. They enjoyed travel, often visiting family in Britain. Sabbaticals involved research work at American and European universities and institutes. 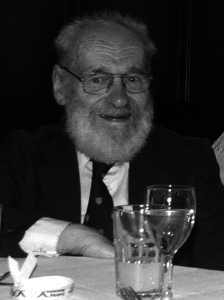 Bernard was Professor of Biochemistry at Lincoln University for 21 years from the department’s foundation, and Dean of Chemistry in the early 1970s. The centennial history of Lincoln notes that staff was “predominantly conservative in outlook” before the infusion of new blood in the 1960s. Bernard was one of several original thinkers whose “keen intellect and radical philosophy” benefited staff thinking. Brian Howard says Bernard was aware of his part in this but “was reluctant to blow his trumpet and never spoke of it”. Brian says his father’s rationalism and intellectualism attracted other original thinkers to his department.

Bernard retired in 1985 and was honoured with the title Professor Emeritus. His successor, Professor Roy Bickerstaffe, says he was meticulous in guiding students and in everything he did. In 40 years as a member of the Royal Society and president of the Canterbury branch in the 1970s, Bernard seldom missed a meeting or a field trip. At 88 and with poor eyesight, he was still being driven to meetings until the week before he died. Fellow society member Dr Alistair Campbell says he had a sharp mind but was a quiet man. He would listen closely, allowing “very little to escape him”, then make appropriate comments. He had strong loyalty to his department and was revered by staff and students.

The Christchurch Press noted that readers of their letters to the editor would be missing his wit and wisdom. “His interests ranged widely. His words scattered pomposity. His style brooked no humbug. Yet he was a quiet, gentle man. His great loves were classical music and the mountains. He was also a man of powerful intellect.”

“Bernard was a true humanist,” according to Denis Dutton. “I remember once discussing the Russian novelist Lermontov with him. He asked for the loan of A Hero of Our Time, and came back after reading it with the most insightful observations.”

“We often saw him at performances in the Chamber Music series. His musical knowledge and perception were redoubtable. He also continued regularly to attend the Court Theatre.” Bernard had a wonderful sense of the absurd. His very last performance at the Darwin Day dinner in Christchurch took place only weeks before he died. It was a talk on Darwin’s mother’s hypochondria and the place of fashionable afflictions in that lady’s pampered life. According to Dutton, “Bernard was hilarious. He had us in stitches.”

Brian says his father was reluctant to go into a retirement home when Molly became ill, but, once there, he still led an active life. Bernard is survived by wife Molly, sons Brian and Kris, and five grandchildren&#8212as well as a great crowd of sad skeptics who were privileged to have known him. Based on an obituary in the Christchurch Press, 26 April.

Skeptics Give Police Thumbs Down