NZ Skeptics link up with a British campaign against homeopathy.

On January 30 there was a concerted global mass overdose – but no-one died because the ‘medication’ was homeopathic. The event grew from the UK-based 10:23 campaign (www.1023.org.uk), which was planning a mass homeopathic overdose to protest against the Boots pharmacy chain stocking homeopathic products.

At a Christchurch Skeptics in the Pub meeting (skepticsinthepub.net.nz) four days before the planned date, one attendee asked if the NZ Skeptics were going to be involved. After all, we had asked a number of times over the years for the professional pharmacy bodies to supply a conference speaker to talk about the ethics of selling products of doubtful efficacy. Things swung quickly into action…

We held the mass overdose in Christchurch’s Cathedral Square, with about 40 people taking part. The event also included an ‘underdose’ – homeopaths believe that the more dilute things are, the more potent they become, so we were careful to try that approach. There are also claims by product manufacturers that, in fact, dosage doesn’t matter at all – whether you take one pill or 100 – the important thing is the frequency of dosage. We covered that base too. No ill effects were reported, apart from a distinct drop in the level of cash in various wallets. While several members were keen to take part, many said they couldn’t in all good conscience bring themselves to buy the stuff in the first place. For the demonstration, we reluctantly purchased two boxes of tablets and a 25ml spray from a Unichem pharmacy, costing $51.95. That’s a lot to pay for less than two tablespoons of water and not much more than that in lactose milk sugar.

One of the homeopathic products downed by the participants had a label saying it contained chamomilia, humulus lupulus, ignatia, kali brom, nux vomica and zinc val. But those substances were actually in homeopathic dilutions, meaning that the kali brom, for example, was present in a proportion comparable to one pinch of sugar in the Atlantic Ocean – that is, not actually present at all.

The pre-publicity from the Christchurch Press saw the New Zealand Council for Homeopaths admit publicly that their products had no material substance in them (our emphasis).

Council spokeswoman Mary Glaisyer said (maryglaisyer.com/2010/01/press-release-mass-overdose): “there’s not one molecule of the original substance remaining” in the diluted remedies that form the basis of this multi-million-dollar industry. This point was picked up by a columnist in the Guardian, who referred to the NZ homeopaths as finding “amusing and creative ways to dig themselves deeper into a hole”.

We got a flurry of interest in the first press release from TV, radio and print media, as well as great support from members, Skeptics in the Pub folk and others concerned about this issue.

TV One ran a very short news item on it; there was a longer, more thoughtful piece on TV3 News.

On TVNZ the Pharmacy Guild was quoted saying of homeopathic products: “there’s a place for them so long as customers are told they only may help”. We believe that that is unethical, and certainly that comment was not made at any of the pharmacists we visited to purchase these products. 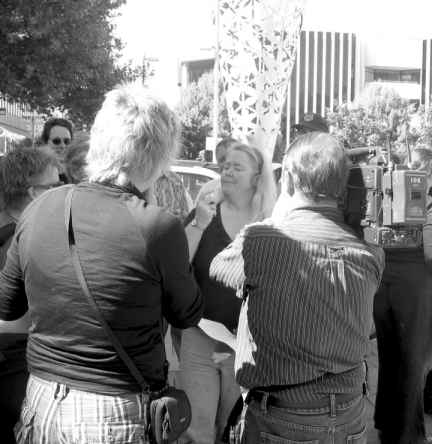 TVNZ’s Close Up national current affairs programme covered the story on February 12. They spent two hours filming us swallowing pills, spritzing sprays, demonstrating how a homeopathic dilution is made, talking about the health and safety issues of relying on water as a medicine and a whole host of other issues, in the cosy confines of The Snug at the Twisted Hop, the bar of choice for the Christchurch Skeptics in the Pub gatherings.

That sterling effort was then diluted to a very short intro followed by a short interview sequence involving Vicki Hyde and Mary Glaisyer. Following on from this, we decided to put up a challenge of our own to the NZ Council of Homeopaths to join the campaign to call for pharmacies to stop selling homeopathic products, as both groups are opposed to the practice, albeit for different reasons.

The New Zealand Council of Homeopaths and others in the trade have stated that their customers require lengthy personalised sessions to “match the energy of the potency of the remedy with the person”. According to Mary Glaisyer, this involves matching symptoms with the huge range of materials on which homeopaths base their ultra-diluted preparations. For example, causticum, more mundanely known as potassium hydroxide, is said to manifest its homeopathic action in “paralytic affections” and “seems to choose preferable [sic] dark-complexioned and rigid-fibered persons”.

Pharmacists who sell homeopathic products in the same way they sell deodorants and perfumed soaps are clearly not meeting basic homeopathic practice. When a number of pharmacies in Christchurch were checked by purchasers of these products, no pharmacy staff asked about symptoms; one simply asked “do you want vitamins with that?”

Many people equate homeopathic products with herbal products, hence the belief that the products contain real substance. In addition, the products are commonly used for conditions which get better with time regardless of treatment, as well as exploiting the well-known placebo effect.

The call for the NZ Skeptics and homeopaths to join forces is not the first time such action has been considered. In 2002, when an Auckland pharmacy starting selling products labelled homeopathic “meningococcal vaccine” and homeopathic “hepatitis B vaccine”, we discussed with the late Bruce Barwell, at that time the president of the NZ Homeopathic Society, a joint release condemning this highly dangerous move. We were concerned that relying on water as a vaccine would lead to unnecessary deaths.

It’s bad enough when the product labelling misleads people into thinking they are buying something more than water. It’s far worse when they misuse a word like vaccine in such a life-threatening area.

The homeopaths were concerned then, as now, that their 200-year-old practices were being misrepresented by non-homeopaths keen to benefit from the multi-million-dollar industry.

A recent survey showed that 94 percent of New Zealanders using homeopathic products aren’t aware that the remedies commonly contain no molecules of the active ingredient – their homeopath or health professional hadn’t disclosed this. The customers believe they are paying for the substances listed on the box, but those were only in the water once upon a time before the massive dilution process began – along with everything else that the water once had in it – the chlorine, the beer, the urine…

You have to ask, at what point does it shift from being an issue of informed consent to become an issue of fraud?

Do pharmacists not know that homeopathic products are just water, or they do know and don’t care because people will buy it not realising the massive mark-up? Either way, that should be a big concern for the health consumer. Here’s a huge industry with virtually no regulatory oversight or consumer protection or come-back, and even its keen customers aren’t aware of the highly dubious practices involved.

When Billy Joel’s daughter attempted to commit suicide in December, she chose to take an overdose of homeopathic medication, and thus suffered no ill effects. While that case was fortunate, there are many cases where people have been harmed by the use of homeopathic products in the place of real medicine. There is a Coroner´s Court record of the death of a baby from meningitis; it had been treated with homeopathic ear drops and the mother was very reluctant for any hospital admission. And the website whatstheharm.net lists many cases from around the world where people have died or had horrible outcomes as a result of a mistaken reliance on homeopathy.

The alternative health industry has built a multi-million-dollar business exploiting the natural healing powers of the human body, as many conditions will get better within two to three days regardless of whether conventional or alternative treatments are used, or even if nothing is done at all. Independent testing has shown that homeopathic preparations take full advantage of this and homeopaths quickly take the credit for any improvement in their clients.

The NZ Skeptics have already had people asking for a list of ethical pharmacists that they can support with their business. We are happy to hear from any pharmacy willing to take a stand on this issue, and will start to create a database for concerned members of the public.

Thanks very much for the note, the support and the energy. We have been overwhelmed by the enthusiasm from the NZ side of things. It’s been great.

To mark the occasion, the NZ Skeptics have released a new Skeptics Guide to Homeopathy, available as a flyer on the website (skeptics.org.nz). It outlines the development of homeopathy from a relatively harmless attempt to help people some 200 years ago through to the multi-million industry of today.

Submission on Proposal for a Natural Health Products Bill