Twelve years after it induced panic among parents world-wide, a paper linking the measles-mumps-rubella (MMR) vaccine to autism has been withdrawn (NZ Herald, 4 February).

The paper, published in the Lancet in 1998, was withdrawn after a preliminary verdict by a panel from Britain’s General Medical Council found Dr Andrew Wakefield and two of his co-authors had acted “dishonestly” and “irresponsibly”.

“It has become clear that several elements of the 1998 paper by Wakefield et al are incorrect,” the Lancet‘s editors stated. “… In particular, the claims in the original paper that children were ‘consecutively referred’ and that investigations were ‘approved’ by the local ethics committee have been proven to be false. Therefore we fully retract this paper.”

The paper was based on just 12 children, some of whom had bowel disorders and autism which had developed after vaccination with MMR. It led to sharp falls in vaccination rates and, said Auckland University’s Immunisation Advisory Centre director of research Helen Petousis-Harris, many preventable cases of disease.

“There are still many parents who are concerned about the Wakefield claims. We hope that this news [the retraction] will add further reassurance that the MMR vaccine is not associated with autism or any other developmental problems.”

The Lancet announced a partial retraction in 2004 after it emerged that Dr Wakefield had received payments for his research from the Legal Aid Board which he had not declared. This was a fatal conflict of interest, the journal said.

Obviously, it came in the middle of the silly season when papers struggle to find copy, but journalist Rebecca Lewis had a lot of fun with astrologers’ predictions for the year ahead (NZ Herald, 3 January).

Pitting one astrologer against another, she checked out what various authorities in the field had to say about Sagittarians. A certain Anne McNaughton picked 2010 as a year in which a full moon in the “financial sector” would get things off to a good start for them. On the other hand Jenny Blume in Woman’s Day reckoned changes at work and home would leave Sagittarians feeling “skint” in autumn.

Someone on the Universal Psychic Guild website calling herself Astrogirl reckoned they would ditch their club-hopping ways and start “nesting”. Marie Claire promised the coming year would be about being daring and outgoing, and astrology.msn.co.nz claimed 2010 would bring out the “practical” side of Sagittarians, with a primary focus on finances.

The truth is in there

UFO researchers UFOCUS NZ are excited at the prospect of hundreds of secret files on mysterious sightings which are to be released by the New Zealand military (The Press, 23 January).

The files cover the period 1979 to 1984, and include the famous Kaikoura sightings of December 1978. They were to have been public in January, but are having personal information removed first to comply with the Privacy Act.

UFOCUS NZ director Suzanne Hansen said the group had been in discussion with the NZ Defence Force for many years. “It is frustrating from a research perspective because we would like to collate these sightings with international research.”

New Zealand Skeptics chairwoman (sic) Vicki Hyde said the files would not be as interesting as they appeared. “The Government is required to log these things and it can give a false impression that there is a vast amount of activity out there.

“There is probably intelligent life elsewhere, but whether it has come here to play silly buggers with us in a game of cosmic hide and seek is another matter.”
“It is a big jump from ‘there was something in the sky and I don’t know what it was’ to ‘that was a craft piloted by aliens’.”

Scientologists to the rescue

Among all the tragic stories coming out of the Haiti earthquake was the strange tale of John Travolta flying his own private jetliner to the beleaguered country with 7000lb of medical supplies – and doctors and ministers from the Church of Scientology (NZ Herald, 27 January).

Scientologists at a hospital in the capital Port au Prince said they were healing patients through “the power of touch to reconnect nervous systems”.

Sylvie, a spokeswoman, said: “We are trained as volunteer ministers. We use a process called ‘assist’ to follow the nervous system to reconnect the main points”.

An Invercargill man on a ghost-hunting trip to Otago has come away with a spooky photo – but not of the building that’s supposed to be haunted (Southland Times, 5 February).

Andrew Watters had gone to St Bathans to have a look at the Vulcan Hotel and its supposed ghost. The pub apparently had only the regular type of spirits and it wasn’t until later that a friend noticed in one of his photos a shape in the upstairs window of the old post office nearby that looks remarkably like an elderly woman. 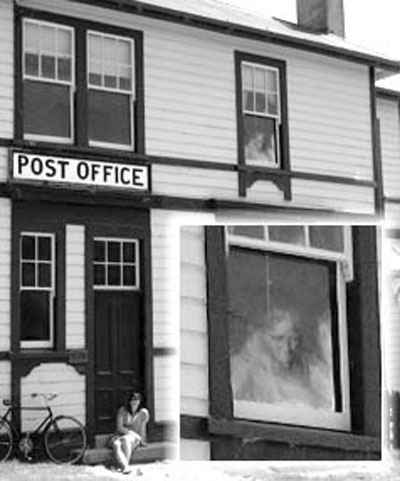 Vulcan Hotel leasee Jude Cavanagh said it was the first she had heard of a ghost sighting at the post office. “It’s a very spirited town, so who knows?”

The post office, managed by the Department of Conservation since the 1950s, had been vacant for about a year, at least in the bodily sense, she said.

Ghost, or reflection of a cloud? I suppose we’ll never know…

A sweat lodge at an Arizona “spiritual retreat” ended up steaming three people to death last October, according to a leaked police report (NZ Herald, 4 January).

The two-hour ceremony followed two days of fasting and not drinking water. When the ceremony was over and people were trying to get the victims out, Ray called attempts to remove blankets from the walls “sacrilegious”. One victim had been subjected to such intense heat his lungs were scorched.
Critics say that such tasks are a sort of confidence trick that exists at the extreme end of America’s US$11.5 billion ($15.8 billion) self-help industry.

Two “captured ghosts” sold on Trademe have gone to a company which sells electronic cigarettes (The Press, 9 March).

The “ghosts” were sold by Avie Woodbury of Christchurch, who says they are the spirits of an old man who lived in the house in the 1920s and a powerful little girl who turned up after a ouija board session. They have been kept in holy water which “dulls the spirits’ energy”.

The auction recorded more than 200,000 page views and made international headlines. Safer Smoke NZ had bid $5000, but the final price dropped to $2830 after a last-minute bidder was revealed to be a fake seeking to push the price up.

Ms Woodbury will donate the proceeds to the SPCA – once exorcist’ s fees have been paid.

Submission on Proposal for a Natural Health Products Bill