His name is Gold, he describes himself as a post- goth Discordian web developer, and one day soon he hopes to be homeless. He’ s also the new chair entity of NZ Skeptics. Annette Taylor finds out more.

The phone is not the instrument of choice for Gold. The 39-year-old suggests Skype, although his webcam is not working; it’s been a hectic few days in Christchurch, in the aftermath of the earthquake. 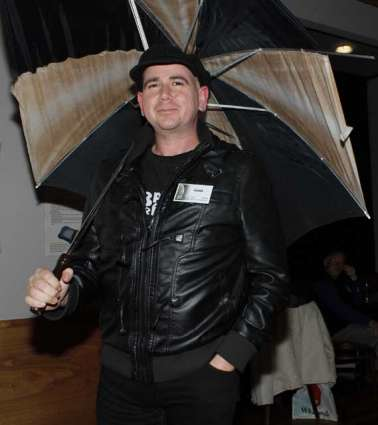 Flatting – temporarily- in Richmond, 2km north-east of the city, a chimney collapsed and things were “up and down and all over the place. We spent a day or so picking stuff up; otherwise it wasn’ t too bad.”

While we’re talking he pauses and waits for an aftershock to pass. Eris, the Greek Goddess of chaos, is having a grand old time.

“When anything goes wrong, when things don’t got to plan, that’s Eris,” Gold says.

He discovered Discordianism while at Canterbury University and says it’ s all about chaos and destruction and a sense of humour.

“We worship Eris and have a Bible equivalent and tenets we follow, such as that one must eat a hot dog on a Friday, which insults almost every religion you can think of, including our own. It’s a joke religion, which is one of the things that completely sold me on it. It’ s a fun thing, and nice to have someone to blame when things go wrong.”

“I used to be a goth. You know – black clothing, the make-up, piercings, tattoos, the great music. It was a phase, so now I refer to myself as post-goth. I’ ve kept the dress sense; the piercings are not quite as obvious anymore. The tats are a little harder to get rid of. I still have the attitude, which is what it was all about, really. And the music is still great.”

Apart from five years in Australia, Gold has lived in New Zealand all his life, much of it in Canterbury. And for most of that time, he has been a sceptic.

Currently an atheist, he didn’ t have a religious background of any sort. “And it wasn’t until early 2000 that I sort of came across skepticism as a movement, or way of thinking. Up until then I was one of those people who didn’t really know there was a label for it.”

He was living in Sydney at the time, and a close friend was a full-on, practising witch.

“While it was kind of cool, I thought that yeah, no, this may be interesting, but it’s not real. It just didn’t gel.”

What galvanised his thinking more were skeptical podcasts and blogs, which he started to “passively consume” while overseas.

He returned to New Zealand in 2005, and headed straight back to Christchurch where he now works developing websites. And, last year, started the first Skeptics in the Pub meetings. “I came across this while in Sydney. It an idea that started in the UK, about 11 years ago, as a lecture series. Afterwards, people wanted more of them, so they continued. It became a very social thing and started to spread across the UK, into the US and Australia.”

But not in New Zealand. “I was working in the central city, away from my previous social group, and thought bugger it, I’d give it a go. I paid some money and set up the first meeting, at the Twisted Hop. We got about 35 people along and it’ s kept going since then. It’s a nice way to get together with like-minded people and have a drink.”

Now there are meetings in Auckland, Wellington and Dunedin as well, but he would like to see more.

Which is a good reason to be intentionally without a home.

“One of the things about the job I’m doing is that all I need is a laptop and net access. I can work anywhere. I can travel around, and pop up somewhere. My plan is to stay in backpackers, and maybe build them a website instead of paying for a room. So, I can be a roving catalyst for getting Skeptics in the Pub meetings set up all over the country.”

He was aware of the NZ Skeptics when he arrived back in New Zealand. “Yes, I’d come across the website, and I knew Vicki. I joined, but it didn’t seem terribly active in a social sense.”

Skeptics in the Pub and the NZ Skeptics will continue to remain separate from each other. “Obviously they have similar agendas, but they serve different purposes. In the pub you have a place where you can say whatever you want, about anything and not worry about libel. The society has assets that can be taken off it, so has to be more cautious.”

As chair-entity, there are a few areas he wants to focus on, and one revolves around, little surprise, computers.

He’d like to work on the members area of the current website, so details can be added.

“Take the case of homeopathy, one of my pet peeves. Someone might find a paper touting the latest proof for it. We can put a link to that paper up, but at the same time we can add other sites that might have done research debunking it. And members can list if they have any special interests or skills on a subject, so they may be a medical doctor, or a lawyer, and have something to add. They can also flag if they are active or passive skeptics, whether they want to be involved in particular issues.”

One issue he would like the society to focus on this year is ACC’s priorities. “As everyone knows, they’re looking at making various cutbacks but on, I think, the wrong things. They still subsidise acupuncture, but are cutting back on hearing aids for elderly people. It’s something the society could have rather a large impact on, if we can get it done right.”

“Recently I was involved with the Australian Skeptics’ campaign with the Australian Vaccination Network, who should really be called the anti-vaccination network. They’re getting a real hammering over there. By using Twitter, a whole bunch of us were able to join in, in real time, and make a difference. It’s powerful crowd-sourcing stuff.”

Similarly, the homeopathic overdose utilised the net to good advantage. “This was started by the Merseyside Skeptics, in the UK, and it pretty much went around the world. We got to kick it off, in Christchurch, because of the time zones. And that led to the NZ Council of Homeopaths admitting on national TV that there is no active ingredient in their so-called medicines. But that campaign was run online as well.”

He acknowledges Vicki’s rat-like cunning. “She’s a clever one, no doubt. I found out recently she spent some time grooming me for this role.”

There is another connection between the two. Vicki started KAOS, Killing As an Organised Sport (in which participants are given contracts to assassinate one another with toy guns), while at university in the 1980s. “Then she picked up the chair role. I was Dictator of Kaos at Canterbury University in 1996. Now I’ve picked up the chair.”

Coincidence? He thinks so. “But it’s very cool. And maybe it means I have the right qualifications for the job.”

As to the name Gold, there’s a story there which he’s happy to talk about, but he tends to save it for face-to-face.

So, if he pops up at a pub in your town go and have a yarn with the new incarnation of the Skeptics’ chair-entity. It’s bound to be illuminating.