The changing of the guard

After 17 years as chair-entity of the NZ Skeptics, Vicki Hyde has stepped down. Annette Taylor talks to her about life, the universe and taniwhas.

Vicki Hyde can’t quite remember who came up with the title. She’s sure Hugh Young had a hand in it, and possibly Frank Haden as well.

“The question was should it be madam chair, or chair person, or what. This was at our AGM in 1992. Someone suggested chairbeing, but it was pointed out that didn’t allow for the possibility there might be an incorporeal soul. Then we went for Chair-entity. It was a bit of light-hearted amusement that has served well over the years.”

Some journalists stop dead in their tracks when hearing the title for the first time, she says.

“Many newspapers and TV won’t use it; they don’t seem to be able to cope with the term, and just say ‘chair’. Ginette McDonald accused us of being politically correct. However it’s a way of saying we’re not completely po-faced about things, and that we don’t take ourselves seriously all the time. Which is a good point to start from.”

The standard charge she often hears is that skeptics are naysayers, boring or humourless. “I always say no, we’re actually excited about the wonder and mystery of the universe. We just want to get rid of things that aren’t real mysteries, so we can delight in those that are.”

When it comes down to defining exactly what a skeptic is, she points out the political attitudes of members are diverse, and there’s a surprising range of religious diversity as well.

“We’re not all hard-line atheists. Our brief is not to go after religious beliefs per se. If someone wants to believe in God, that’s fine, it’s a belief. Otherwise we just become blurred in with the rationalists and humanists. But if someone comes up with what they say is a piece of Noah’s Ark, that’s scientifically testable.” 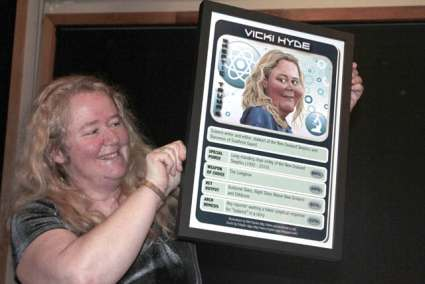 She was a little sad when the society’s formal name, the New Zealand Committee for the Scientific Investigation of Claims of the Paranormal, was changed to the NZ Skeptics in 2007. “It was especially valuable in interviews; I was able to use it to point out what it was we did, and didn’t do. As a consequence I’m still explaining to people that no, we don’t go after capitalism, or religion, we’re not sceptical about everything and anything under the sun.”

Vicki’s introduction to the Skeptics was as a freelance writer for Pacific Way magazine, covering the firewalk at the Christchurch conference in 1990.

“I got talking with Denis Dutton and others, over that weekend, and thought this is interesting.”

She started helping with the magazine, and in 1992 was nominated for the chair, which had been held by Warwick Don.

“Denis raced off to The Dominion and said ‘Look, look, we’ve got a new chairperson at the Skeptics. She’s female, pregnant and of Maori descent; how much more politically correct can you get?'”

Vicki, who was 30, says it was like inheriting a whole group of aunts and uncles.

“We have changed from the early days, and particularly over the last few years. Back then the demographics of the group was late 50s, early 60s, and it remained that way for some time.”

Now members are younger, and there are more women involved, which she puts down to the internet. “We’re able to do more outreach; there are email groups and blogs, podcasts… We have 1500 people on our Skeptic Alert email list, three times more than paid members.”

Then there are initiatives like Skeptics in the Pub, which has provided another place for like-minded people to meet. “I think we’re still attracting the same kind of people, but through different ways. People who are interested in the world and how it works, and want to sit down and chat.”

As for our fellow kiwis, she thinks we’re a fairly down-to-earth bunch. “I don’t know if it’s our colonial heritage or the kiwi attitude of the proof is in the pudding, but in general we’re a bit more pragmatic. What is interesting is we don’t feel under siege from the religious right as much as Americans do.”

While attending the World Skeptics Conference in Burbank, California in 2002 she says there was a distinct feeling a war was being fought. “There’s a strong overlap between the rationalists and skeptics there; they have very close ties. We’re living in a country where, in the last election debate, both the then-prime minister and the leader of the opposition could both say, no, we don’t believe in God, on national TV, and it’s no biggie.”

She will continue as the society’s media spokesperson. “This requires the ability to be rung at 6am on Friday the 13th by some morning radio journo who wants to talk about superstitions. And to be nice to them.”

The job requires knowing a lot about all sorts of things. “Pseudoscience and the paranormal can present in all sorts of ways. Most of the time I have an idea what they’re talking about but sometimes they’ll ask a question about some obscure cult, or a multi-level marketing venture.”

The issues have changed over the years, she says. The original focus was on psychics, UFOs and astrology, with the occasional taniwha thrown in.

“We’ve shifted more and more into questions of what’s the potential harm of, say, an alternative medicine. While there is much we can laugh at, some things make you very sober, such as the Liam Williams-Holloway case. In addition to the wee boy dying, the fallout of this was that oncologists started getting parents asking about other cures for their child’s cancer. It actually increased interest in these claimed cures and made it a lot harder for the doctors.”

It was interesting, a few years later, to see the reaction to a Pacific Island family charged with manslaughter over their 14-year-old son’s death. “He decided to remove himself from the cancer treatment. They were then put through the courts. The only differences I can see with what they were doing, and Liam’s parents, is that this was a 14-year-old, who was able to make some form of informed decision on his own treatment. And they were doing it on religious grounds. We seem to have a lot less tolerance for that, oddly enough, than we do for people who are trying alternative health.” 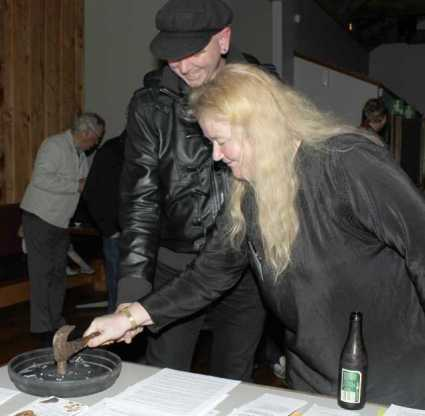 Another “lowlight” was the false memory fad of the 90s, with its offshoot claims of Satanic ritual abuse and organised abuse of young children.

“We knew it was coming; we’d seen it first in the US. I predicted we’d have something similar within six months and the Peter Ellis case broke several months afterwards.”

The decision to donate funds from the Skeptics to Ellis’s defence resulted in at least one member resigning, she remembers. “This step was taken not because we all felt implicitly he was innocent, but that there were sufficient questions which should have been raised and had not been. We felt we needed to take a stand. I wrote an article for the NZ Skeptic about why we were supporting a convicted child abuser, explaining the background. As the saying goes, ‘for evil to succeed requires only that good people do nothing’. For people to be exploited by psychics or the latest would-be cancer cure, all it needs is for people not to ask ‘where is the evidence?'”

The Skeptics are not here to castigate Granny for reading tea leaves, Hyde says. “But if a psychic bounces up on national TV, talking about a missing child case, and promotes their two-for-one ticket offer for their upcoming tour – you have to point out that people are being exploited.”

The future looks good for the Skeptics, she unhesitatingly predicts. “There’s a whole host of bloggers out there, and podcasts and the like, that are pulling in people and ideas. I think this can work really well with our more formal group. We are useful because we have established communication channels and long-term relationships with the media, as well as a small fighting fund. And the informal groups are great because they provide social connections, enthusiasm and new blood. Which,” she says, “is one of the reasons why I’m looking forward to working with Gold; he’s got all that.”

And, sadly, there will always be a need for skeptics.

“It can be frustrating, but you just keep boxing on. If you can get one person to stop and think about something, it’s worthwhile. That’s all we try to do. To get people to think.”