Yet another military syndrome 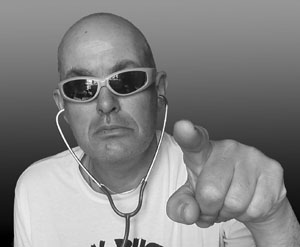 I imagine that most people joining the Armed Forces would expect the likelihood of a posting to an area of conflict. I know I did. I spent six months in Iraq between the two Gulf Wars. I admit that it was stressful but it was also one of the most exciting and interesting experiences that I have ever had. But that’s another story.

It appears however, that many would prefer a safe posting at home, typing memoranda or serving tea in the mess. The only risks from these activities are RSI or perhaps a minor burn from slopping the tea. When military personnel are posted to an area of conflict this comes as a shock. Compensation is fortunately available. It appears that shell shock and post traumatic stress disorder are passé. The new ‘buzz diagnosis’ is MTBI, or ‘mild traumatic brain injury’.

The cause is blast from roadside bombs and this can lead to “memory loss, depression and anxiety”. The US has instituted a screening programme for those returning from active service and they estimate as many as 20 percent may be at risk of MTBI. The UK MOD remains skeptical and is quoted as saying: “It is a very complex area. We have no way of knowing whether (the US assessment) is accurate because there is a level of dispute as to what constitutes MTBI.” You could apply the same logic to stories of alien abduction.

Skeptics could note that the diagnosis is largely subjective but should be alarmed that therapists such as Kit Malia are poised to cash in: “If the American figures are correct, this is massive, absolutely massive.” More work for the army of counsellors.

As the saying goes, war is hell. Many returned servicemen will tell you that and they fervently wish for an end to all conflict. Instead of pursuing this aim, we continue to send young men and women to various hell-holes and wonder why they fall apart. It is hardly surprising that they choose to fall apart in culturally acceptable ways with diagnoses such as GWS, PTSD and now MTBI. Screening programmes, websites and a telephone help line will ensure that those suffering from MTBI are suitably coached into supplying the right symptoms of this disorder.

When I read about these daft syndromes, I often think of my late father who experienced combat as an infantryman in World War Two. He came home, resumed his career and the only disability he had was spinal tuberculosis, contracted in Japan while serving with the occupation forces. The only compensation was the opportunity for resuming academic studies. Perhaps we could retrospectively label this ‘mild tubercular back injury’.

Today’s military personnel are not conscripted. They have a choice. I say, take the money and accept the consequences. Let’s either call an end to absurd diagnoses such as MTBI, or have the moral courage to eschew warfare and refuse to send our men and women on such missions.

Some children become upset when confronted with new sounds or places. They scream and misbehave. This behaviour is set to become yet another disorder of childhood-‘Sensory Processing Disorder’. Advocates are pressing the American Psychiatric Association to include this condition in its manual of mental disorders. Sound familiar?

Therapists have already set up clinics to deal with this new ‘disease’. One such clinic is Paediatric Potentials, where children experience play therapy including a spandex cocoon that can calm them. The condition was studied in the 1960s by a psychologist who called it ‘Sensory Integration Dysfunction’.

This has all the hallmarks of a fad diagnosis. The symptoms and signs of the condition are completely subjective. The condition relies on interpreting extremes of behaviour as being pathological. Physician enthusiasts are recruited to popularise the condition. Pressure is put on the relevant authorities to endorse it. This is precisely the path that led to the diagnostic labels of PTSD and ADHD. It appears that some academics are incapable of understanding normal human behaviour.

Are your children reaching their full potential?

So reads the advertisement from a local pharmacy. Perhaps this is the solution to SPD? For only $20 you can get 60 capsules of ‘Clever Kids Omega 3’. This product has been designed to “help support brain development and learning ability, including concentration, memory and problem solving, and may assist in the temporary relief of mild anxiety and irritability.”

This is the perfect product for families where parents are too busy to have time to interact with their children. If anybody could be bothered to test this useless product, I predict it will have no advantage over placebo.

Pharmac, the Government’s drug buying agency, is constantly looking at saving money on our huge national drug bill. Ritalin (methylphenidate) has been supplanted by a cheaper generic equivalent, Rubifen, which is one million dollars a year cheaper. Methylphenidate is used in the treatment of ADHD, another fad diagnosis like SPD. Parents remain unconvinced and many are demanding a switch back to Ritalin. This is typical of placebo dependence where people become convinced that the new small yellow pill is somehow inferior to their familiar big red pill. Given that ADHD is an entirely subjective disorder it is not surprising that there is a subjective obsession over the familiar drug versus a generic equivalent.

While I’m on the subject of useless products …

An Australian man drank eight Red Bull energy drinks in five hours and suffered a cardiac arrest while competing in a motocross event. This equated to a caffeine intake of 400mg which is close to the toxicity level for an average adult. The label warned against consuming more than one to two cans or bottles of the product per day. The victim was quoted as saying he drank four Red Bull drinks per day because “With the work I do I don’t have a lot of time to eat.” On the day of his acute illness he suffered a cardiac arrest and required defibrillation. He admitted to consuming eight Red Bull drinks over a five-hour period as follows: “It was to get a bit of a buzz and keep down my reaction times.”

It is difficult to feel sympathy for such moronic behaviour. Red Bull is a useless and unnecessary product which has been successfully marketed for idiots. While I’m on this topic how about …

The US Food and Drug Administration (FDA) commissioned some outside experts to advise on medicines used by parents to treat their children’s coughs and colds. The conclusion was that products such as cough suppressants do not work and may cause side effects in young children. I recall that Consumer has reported on these products and the evidence is that they are not worth the money. This is the familiar placebo effect at work.