Carl Sagan, one of the world’s greatest popularisers of science, died on December 20th at the age of 62, after a long battle with a bone marrow disease. Sagan was one of America’s pre-eminent scientists, educators, skeptics and humanists. He was also a founding member and Fellow of the Committee for the Scientific Investigation of Claims of the Paranormal (CSICOP) and a member of the Council for Secular Humanism’s International Academy of Humanism.

Names have been concealed to protect them from the international legume conspiracy.

Dr Mann’s essay in this issue will annoy some readers, but it belongs here because it deals with one of the key debates of our time.

The social vision associated with the name Walter Nash, or for present purposes Jack Marshall, has crumbled. The most secure and decent high culture, which flowered for some decades, is now on almost every measure except GNP in rapid decline.

NZCSIOP does not take a stand against religious belief, per se, and many Christians are committed Skeptics. While Mr van der Lingen’s essay may appear to contradict this stance, he is not arguing that religious belief is incompatible with being a Skeptic; he is only challenging some claims and methodologies adopted by those who take a particular set of positions regarding the relationship between evolutionary science and contemporary Christian belief.

A conversation off the Skeptics newsgroup.

A crown-of-thorns starfish can cause severe pain if the spines penetrate your skin. Local remedies include placing the offending animal over the injury, presumably in the belief that the sucker feet will pull detached spines from the wound.

1996 was an interesting year. Rush Limbaugh became the Republican nominee for President; Roseanne killed off her popular TV character; cures for baldness, arthritis, and AIDS were announced; and Michael Jackson had a sex-change operation. 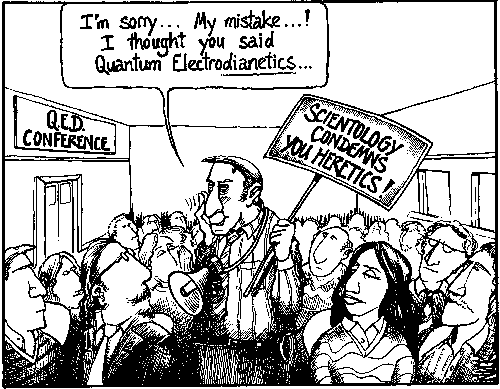