Things that visit by night

Annette Taylor has personal experience of a phenomenon that lies behind many tales of ghosts, demonic possession, and alien abduction.

I was asleep. Marley, our cat, was faster asleep by my side.

Suddenly I was awake, at the sound of another cat’s tread in the room. Then something jumped up and landed on the bed, and padded right up to me, wanting under the covers.

I lay absolutely, perfectly still. In fact, I couldn’t move. The cat moved to the end of the bed and settled down. The minutes ticked by, and I worried about an all-out cat fight flaring up. I wondered, for a second, if this could be Willow come a-visiting. The thing was, we’d buried her in the garden not two weeks before (I’m not going to reference Monty Python here), and I was fairly certain it wasn’t poor old Willow, even while half asleep.

Then I came fully awake, groped in the dark for the cat I was convinced was lying there and found only Marley, snoring her head off.

It seemed so real, right down to the whiff of a slightly damp moggy and the pressure of her landing on the bed. A tad confused, I fell asleep. The next morning it had all the weight of a dream.

I was missing my cat and possibly, in a sense, she did come to say hello, but very much in a dream. My dad used to drop by at night after he died, too. We had good chats, but those were definitely dreams. I never thought for a moment he was a spirit hanging about.

This was different. At the time, I was certain there was a cat in the room, on my bed, and I couldn’t move a muscle. In retrospect, I’m deeply disappointed the cat wasn’t unspeakably evil, with glowing coal eyes, yellow fangs and claws of death; that would have ticked every box for being a classic case of sleep paralysis.

No better image conveys the terror this phenomenon can bring than The Nightmare, by Henry Fuseli. 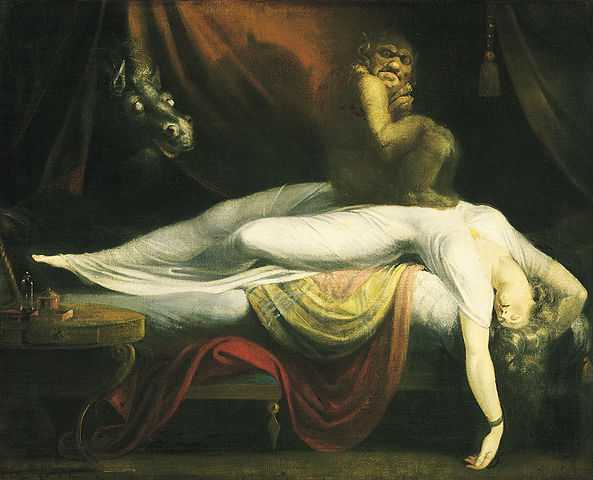 The victim lies helpless on the darkened bed, and gleefully perched on her is the terrifying incubus, peering straight out of the picture. I’ll have you too, it seems to gloat.

The work, painted in 1781, is said to have influenced writers such as Mary Shelley and Edgar Allan Poe and it is still as full of menace today. Hypnopompic dreaming – or more properly Isolated Sleep Paralysis – occurs mainly upon awakening from sleep. It includes a range of visual and auditory experiences:

I had all but the first, and the additional olfactory bonus of the smell of damp moggy.

Most people report the experience as being intensely frightening and while mine wasn’t scary, it was definitely disturbing.

Sleep paralysis, also known as night terrors, has been implicated in a lot of things of interest to skeptics, such as alien abductions. Carl Sagan, in The Demon-Haunted World, says it is telling that alien abductions occur mainly on falling asleep or when waking up. “Abduction therapists are puzzled when their patients describe crying out in terror while their spouses sleep leadenly beside them. But isn’t this typical of dreams, our shouts for help unheard?” he writes.

Before we had visits from flying saucers, these vivid dreams were linked with the supernatural – witchcraft, demons, ghosties and things that go bump in the night.

The term hypnopompic comes from 19th century psychic researcher and poet Frederic Myers. He was a founding member of the Society for Psychical Research in 1883 and influenced Carl Jung, among others. He believed apparitions were not hallucinations, but really existed in the ‘metetherial’ dream-like world, which lies beyond everyday existence. It’s a good word, even if these days most (rational) people consider such dreams to be normal phenomena, rather than supernatural.

I mentioned my dream to a friend, who made the comment it would be nice to think that the visitor really was my cat Willow. But no. To allow that comforting thought traction ushers in a flood of superstitions which I really have no time for. It was a genuinely interesting occurrence, in and of itself.

Sleep Paralysis is reported very frequently among people with sleep disorders, and otherwise occurs frequently in 6 percent of the population; and occasionally in 60 percent. When it occurs repeatedly it is categorised as Recurrent Sleep Paralysis. But I’m not going to be putting out a saucer of milk any time soon.